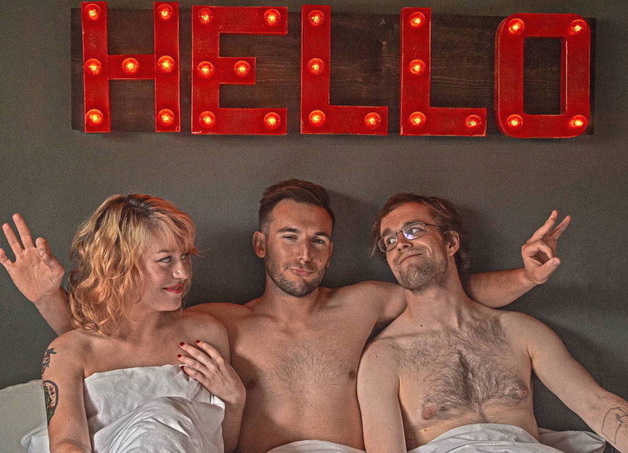 Zanna Paulson
Lighting Design
Featuring:
Andy Buffelen, Madeleine Delaplane, Erin Ison, Katya Landau,
Andrew Opatkiewicz, Josh Padilla, Campbell Scarborough, Buddy Todd
September 11, 17, 18, 24, 26
Ballard Underground Theatre
A fast-paced comedy about a man, his boyfriend, and his boyfriend's girlfriend, Everybody Here Says Hello! is a bittersweet exploration of the ups and downs inherent to modern relationships and sexuality, the absurd distortion of our lives when seen through the eyes of our friends, and all the things we want to say to one another but never do.

WINNER of the Theatre Bay Area Award for OUTSTANDING WORLD PREMIERE!
"...in a story that at first seems to have a gay relationship at its core before sending out tendrils into complex webs of sexual permutations. Happy and sad are always in close proximity, but Bousel finds ways to evoke laughs that always seem appropriate for the situations. Even the most quippish wisecracks ring true for the characters, who feel like fresh creations but are somehow still familiar."
Richard Dodds, BAY AREA REPORTER


"Everybody Here Says Hello! is a delightful contemporary comedy... It contains some of Bousel's smartest writing and is performed by a talented, finely-tuned ensemble. If you've ever wanted to see a furiously fast-paced, fierce Feydeau farce without any slamming doors, Bousel's play definitely hits the spot!"
George Heymont, HUFFINGTON POST